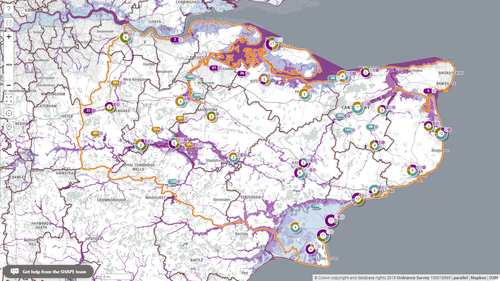 Number of inhabitants: 1.55 million, the largest population of all English counties (gov.uk, 2019)

Relevant characteristics of the water system:

The landscape of Kent is defined by its river systems and geography. The largest catchment in Kent, the Medway catchment, covers 2,409 km2 comprising some 25% of the area of the County. The River Medway flows for 113 km from just inside the West Sussex border to the point where it enters the Thames Estuary in north Kent. The River Medway is tidal downstream of Allington Lock at Maidstone. Tributaries of the Medway include The Rivers Eden, Bourne, Teise, Beult, Sherway and Len, along with the Shaw and Loose Streams.

The second largest catchment in Kent is that of the River Stour, fed by the East and Little Stour, the rivers Nailbourne, Wingham and Wantsum and the Aylesford, Brook, Kennington and North Streams. The major towns of Ashford and Canterbury have grown up on the banks of the River Stour. The river is tidal downstream of Fordwich.

Fluvial, pluvial, surface water and tidal flood risk are all present in Kent, and some flooding occurs regularly around the county. The most recent floods are listed below:

For more on flood risks in this area, please visit  https://www.gov.uk/check-flood-risk.