Introducing EMont with help of a case

EMont describes and assesses knowing-how knowledge (expertise, behavior and (non-)human activities) and worldviews. The ontology consists of seven modeling elements, which will be introduced shortly with help of the fictitious and simplified situation of people counteracting a flooding disaster and is introduced in a scientific article.

Capturing activities with the PQR formula

In EMM human behavior is defined as 'human activity systems’. Human activity systems, as well as activities of other kinds of actors (e.g. machinery), can be modeled with help of the PQR formula. This formula originates from the Soft Systems Methodology, and has to be applied as a root definition: a statement written in a few sentences capturing the intention of someone’s worldview. It concisely captures (human) activities executed to deal with particular circumstances which are motivated by the actors' worldview. The PQR formula is pivotal to EMont. The letters P, Q and R do not resemble anything, except for being subsequent letters in the alphabet. A specific meaning, however, is attached to these letters:

Do P by a Q in order to achieve R.

Applying the PQR formula touches upon the expertise or knowing-how knowledge of an expert, who, based on his experience, intuitively knows what to do in specific situations. In other words, an expert applies the right activity patterns almost without consciously thinking. The PQR formula in the case of counteracting a disaster (see figure 1) looks like:

You can counteract the disaster (P - what) by, depending on the circumstances, fighting it (Q1 - how) or evacuating (Q2 - how) in order to save your and your relatives' lives (R - why). 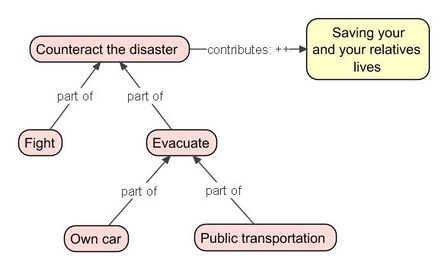 Generalizing from the example in figure 1: by applying the PQR formula recursively, we can model an experts’ knowledge, that is, his behavioral patterns, at any desired level of detail. The main activity (P) and main goal (R) address what should be done in a situation, they however do not yet specify how (Q) it can be done. Consequently, activities usually consist of more specific sub-activities (Q's), which altogether contribute to the main activity (P). Just like activities, goals can be decomposed into sub-goals as well.

A situation is a network of actors, whether human or not, brought together to accomplishing shared or non-shared goals. These situations can also be called 'nested cognitive patterns of human activity systems'. In the situation “Community resilience” (figure 2) a community tries to cope with disturbances (main activity - what) by minimizing the effect of disturbances (main goal - why), including the more specific and nested situation "Flooding". Technically, the situation is modeled as a context, usually built up from different sub-contexts. The sub-context always has at least one 'super context'. Subsequently, roles or responsibilities of actors in situations are modeled as (sub-)contexts as well. Specific roles apply to specific situations. For example, the role “Civilian:Civilian dealing with flooding” shows that the role “Civilian dealing with flooding” is a sub-context of the situation “Flooding” and at the same time it is a sub-context of the role “Civilian”. Thus, a sub-context can be derived from more than one super context. 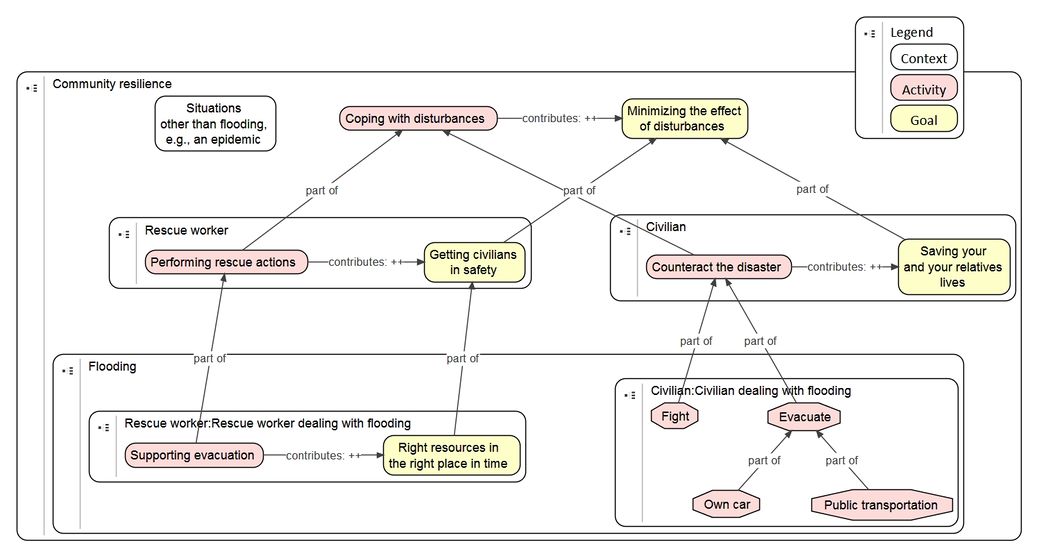 To conclude, it can be observed that a context is used to model situations comprising of sub-situations and roles. In turn, a role may be regarded as a situation for its constituents. That is, a role can be seen as a situation made up of sub-roles and sub-situations. Another typical example of a context presented as a role is an organization with its specific objective or responsibility where its employees are engaged in specific activities. From the perspective of an employee however, the organization may appear as a situation to operate in rather than a role. So it is a matter of perspective from which we can abstract away by using the general concept of nested contexts.

Interdependencies and relations between elements

A situation is characterized by the interactions between actors and one or more conditions. Conditions determine how and how well the actors in a situation interact and execute activities, but conditions can also be influenced by the behavior of actors. A condition is often defined in a qualified way, e.g. “the availability of rescue workers”, or “ sufficient supply of evacuation resources”. As a result, a condition can also be regarded as an internal system indicator.

Typically, a goal and condition are related, expressed by the relation “contributes to”: a goal contributes to a condition. In figure 3, the goal “Right resources in the right place in time” contributes positively to the condition “Evacuation resources”. In other words, the condition is an indication of the extent to which the goal has been achieved. Note, a goal and a condition are deliberately modeled as different elements, because in real situations it frequently occurs that achieving one goal (contributing to a condition) can be undermined by achieving another goal (contributing to the same condition), e.g. the goal of a local government to mainly invest in and distribute inflatable boats for evacuation.

The examples in figures 3 and 4 show the type and quality of relations between activities, goals and conditions.

Regarding roles we have up to now focused only on one single way to carry out activities related to that role. However, people can carry out an activity in various ways. These different approaches originate from the variety people and their worldviews. And vice-versa: someone's worldview can vary depending on the situation he is engaged in. Therefore, different worldviews will have to be considered in modeling activities. A worldview is considered a fixed idea. Therefore, as a modeling element it is called a belief. A belief is similar to a condition, but in contrast, a belief cannot be changed within the system itself.

Worldviews can be included in the model similarly to the way contexts were used to model roles in specific situations. Figure 5 illustrates a situation with different worldviews: a Civilian can deal with flooding by leading the neighborhood and helping his neighbors or by dealing with flooding on its own. The sub-situation “Civilian dealing with flooding on its own” includes the belief “Do not trust the government”, which means that this particular civilian does not trust the government to organize public transport as evacuation means and will evacuate only with his own car. 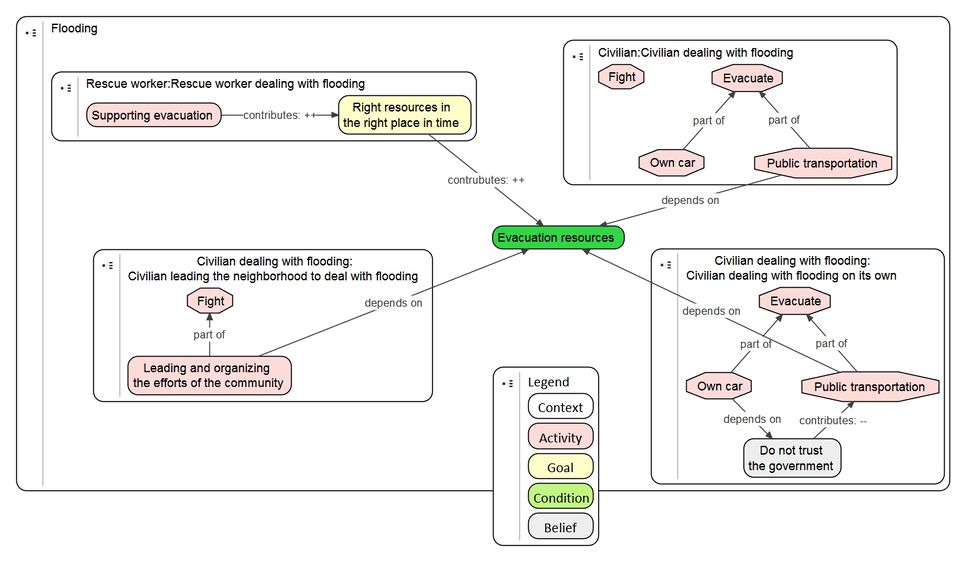 The main scheme of Community resilience

Creating clarity in a complex activity model, such as the one about community resilience (see figure 6, composed from figures 2, 3 and 5), can be done firstly by developing a main scheme presenting the big, more generic picture including only the most important situations (sub-contexts, or so-called ‘hooks’). Details of the different sub-contexts can be provided only when 'zooming in', thus by developing separate schemes that describe the sub-context selected from the main scheme. 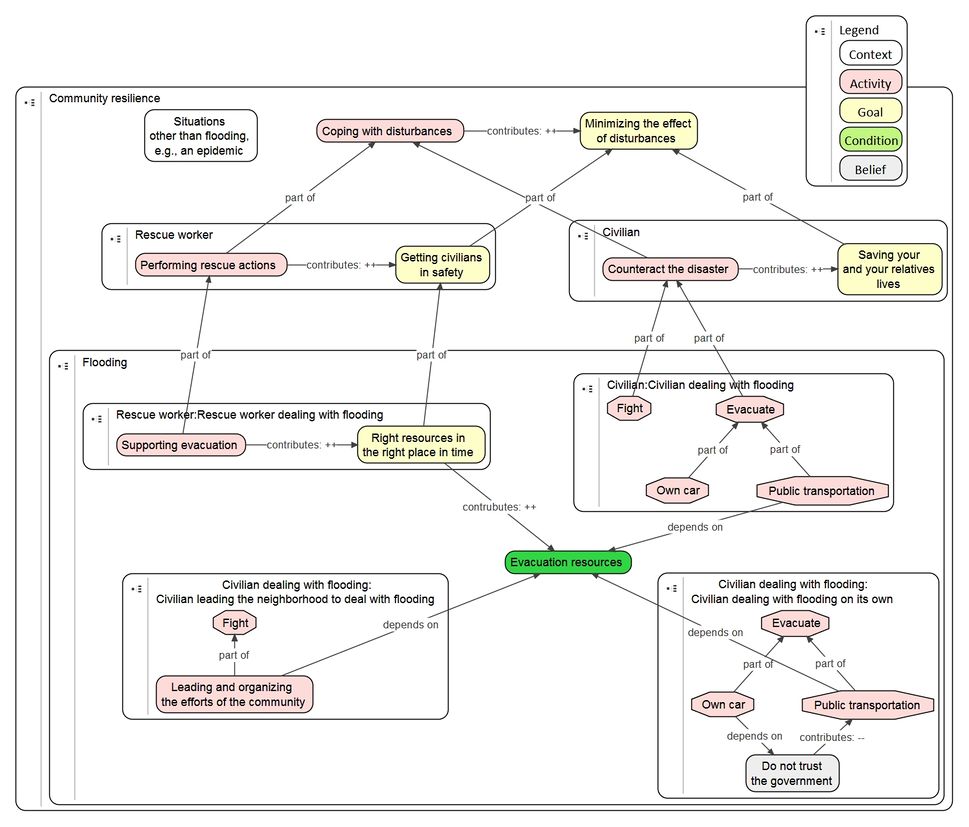 Figure 6. An overview of the situation Community resilience including the main contexts and other EMont modeling elements.

The strength of modeling complex situations with EMont lies in putting patterns of (non-)human behavior, modeled with the PQR formula, in a context and applying these recursively. A context is key to modeling situations or roles, related activities and interactions of actors with different worldviews. The example of the flooding disaster used as a simplified and incomplete illustration of a real situation. Real situations can be modeled in a comprehensive manner, but the models can also become very complex and big. Detailed descriptions of the sub-situations can be made by dividing a situation into sub-contexts and describing them in separate activity models.

Subjects not discussed in this introduction to modeling with EMont include documenting good and bad practices, a sequence of activities ('composed activities'), and modeling conceptual knowledge and its connection to PQR’s in a context. These subjects makes modeling with EMont more comprehensive, yet does not imply introducing significant different elements to EMont.