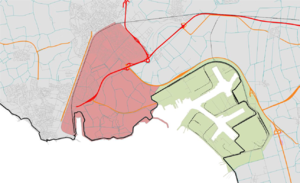 A map of the Sloe area in Zeeland, the Netherlands. The red area is Ritthem, the green area is Sloe.

The pilot Sloe area is located in the harbour of Ritthem including the surrounding neighbourhood of Mortiere (Middelburg) and the municipalities of Vlissingen and Borsele. The total population of the three areas is 57.716 (2000 in Mortiere, 22.716 in Borsele and 33.000 in Vlissingen). This harbour area is currently used for industry and navigation purposes. It is a low lying area, also called ‘bathtub Ritthem’ which is at high risk of flooding if a dike would break (interview pilot manager, 2019).

The Sloe is a harbor/industrial area with 10 companies, and protected by primary flood defenses because it is situated on a high level around +5,20 NAP and seen as a rather safe area. But in case of a flooding, the area might be flooded (+/- 30 cm) (Baseline monitor Sloegebied, 2017).

With regard to flood scenarios, a distinction can be made between less extreme situations (up to once every 1,000 years) in which only flooding occurs in the Sloe area, and more extreme situations in which there is a real risk of flooding of the bathtub Ritthem. In particular, these more extreme situations are relevant for the preparation and implementation of crisis management because this is when the Sloe area will also flood. The Dutch strategy focuses mainly on layer 1, prevention. The Zeeland region counts on the safety delivered by the dikes. The harbor/industrial area of Ritthem is on a high level around +5,20 NAP and therefore seen as a rather safe area (interview pilot manager, 2019). In case of a dike breach under extreme storm conditions the harbour area might be flooded (+/- 30 cm) in the surroundings flood depths might vary between 3-5m (Terpstra and Buijs, 2020).