Vejle is an old market town dating from the middle of the 13th century. The town is located at the head of Vejle Fjord, at the point where the two rivers, Grejs Å and Vejle Å, converge. The town has an area of approx. 33 km2 and a population of around 57,000. Vejle’s town centre is home to a number of historic buildings. The town is an attractive place to shop, and there is expansion in the coastal areas to the north and south of the harbour, both residential and commercial.

Vejle Fjord is west-facing and opens out into the northern part of the Lillebælt. The terrain around the town is relatively low, but rises more steeply on both sides of the fjord. The two rivers Grejs Å and Vejle Å flow down from the valley catchment areas of Grejsdalen and Vejle Ådal and meet in the town. Vejle Å, which is the biggest of the two rivers, is more than 30 km long, with a catchment area, Vejle Ådal, of around 250 km2. The river runs into Vejle town from the west where it meets Grejs Å. Grejs Å is around 22 km long and runs into Vejle from the north from its roughly 70 km2 catchment area, Grejsdalen valley. Grejs Å splits into two branches, Omløbsåen (’the bypass river’) and Mølleåen, at a diversion point north of the town. Omløbsåen and Mølleåen run through the town in a westerly and easterly direction respec­tively, before they both empty out into Vejle Å. 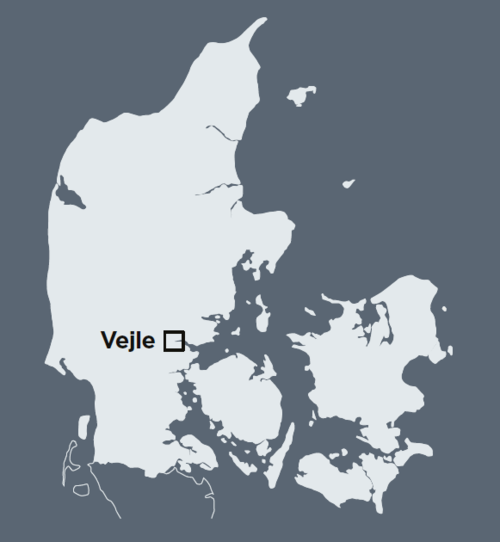 Location of city of Vejle in Denmark (from Municipality Vejle, 2016).

Relevant characteristics of the water system: Vejle is located at the mouth of a fjord, at the bottom of a steep valley where two rivers discharge into the fjord. These geographic characteristics make it naturally prone to flooding. Furthermore, the impact of climate change has increased the frequency and severity of flooding as rainfall events get more intense, average sea level continue to rise and storms surges become more frequent. Historically, Vejle has frequently suffered from flooding due to intense rainfall either in the city or over the river catchments, and by high water level – caused by storm surges – in the fjord (DHI, 2019).  The rivers flow through a sluice before they discharge into the fjord (interview pilot manager, 2019).

Vejle is at risk of flooding from the rivers, the fjord and from heavy rainfall.

Flooding from Vejle Å occurs primarily in connection with long periods of heavy rainfall, while flooding from Grejs Å, Mølleåen and Omløbsåen occurs more often with intense precipitation in the Grejsdalen Valley. Flooding from the fjord occurs with storm surges, where the water is pushed in through the fjord. This occurs most often with backwash flooding, after the water has pushed through the inner Danish straits in the Baltic Sea and then moves back towards the North Sea. A statistical 100-year flood in Vejle Fjord lies around 160-170 cm (Danish Coastal Authority, 2018).

The flooding occurs widely in Vejle depending on the source as illustrated in Figure 3, and can impact the whole town, including residential areas, businesses, public services and so on.