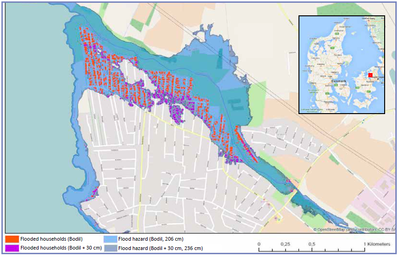 Relevant characteristics of the water system (main water bodies): Jyllinge Nordmark is a village located in Roskilde Municipality.  Jyllinge Nordmark is situated in a low-lying area. New settlements are no longer occurring in the pilot area but existing settlement are not located optimal in regards to risk of flooding. Since 1990, the area has gradually been transformed into year-round housing and in Jyllinge Nordmark there are currently registered approximately 1740 year-round houses and almost 240 holiday homes. The remaining cottages are constantly being converted into year-round housing, and this development is expected to continue (Roskillde Kommune, 2017).

The municipality of Roskilde town is located at the mouth of the Roskilde Fjord as part of the North Sea. Roskilde Fjord separates Hornsherred and North Zealand. At the south-east coast of the fjord is the town of Roskilde. Frederikssund and Jyllinge are larger showers along the eastern coast in the fjord. Jyllinge Nordmark where Værebro Å runs through the area has been heavily influenced by floods in recent years.  The most recent major flood occurred on 6th December 2013, caused by the storm "Bodil", where the water level in Holbæk harbor was measured at 1.84 and 1.97 in Roskilde Harbor - both measured in DVR90. Early January 2019, there were several minor incidents with water levels of about 1.25 meters above daily water in the fjords (North Sea Region, 2019).

Roskilde municipality is in the process of establishing a dike. Since the area is subject to NATURA 2000 regulation, it has proved difficult to establish a dike (Roskillde Kommune, 2017).