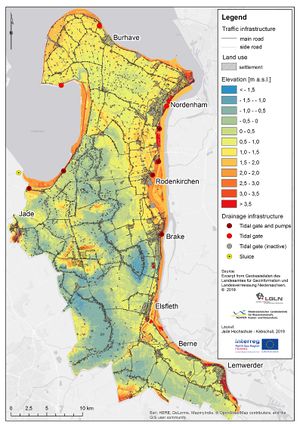 The Wesermarsch region lies in the northwest of Germany.

The region is flat and on average, it lies between 2 and 3 metres below sea level (NIBIS); 1/3 of the area lies below sea level, 2/3 below mean high tide.  Flood risks come from three sides: river, rain and sea. In case of a storm surge with dike breaches, the impact will be high because the area is low-lying and would be flooded quickly; in case of river or/and rainfall flooding  impact is expected to be rather small and local.

River flooding is only a major risk if at the same time sea level is high.Rainfall can be a serious problem in case heavy rainfall occurs in dry summer periods. Then, water from the Weser River is conveyed into the Wesermarsch, using the big canals. If they are used for watering, drainage is not possible at the same time.

The official flood hazard level for this region is 1, meaning 'not harmful' (Niedersächsisches Bodeninformationssystem).