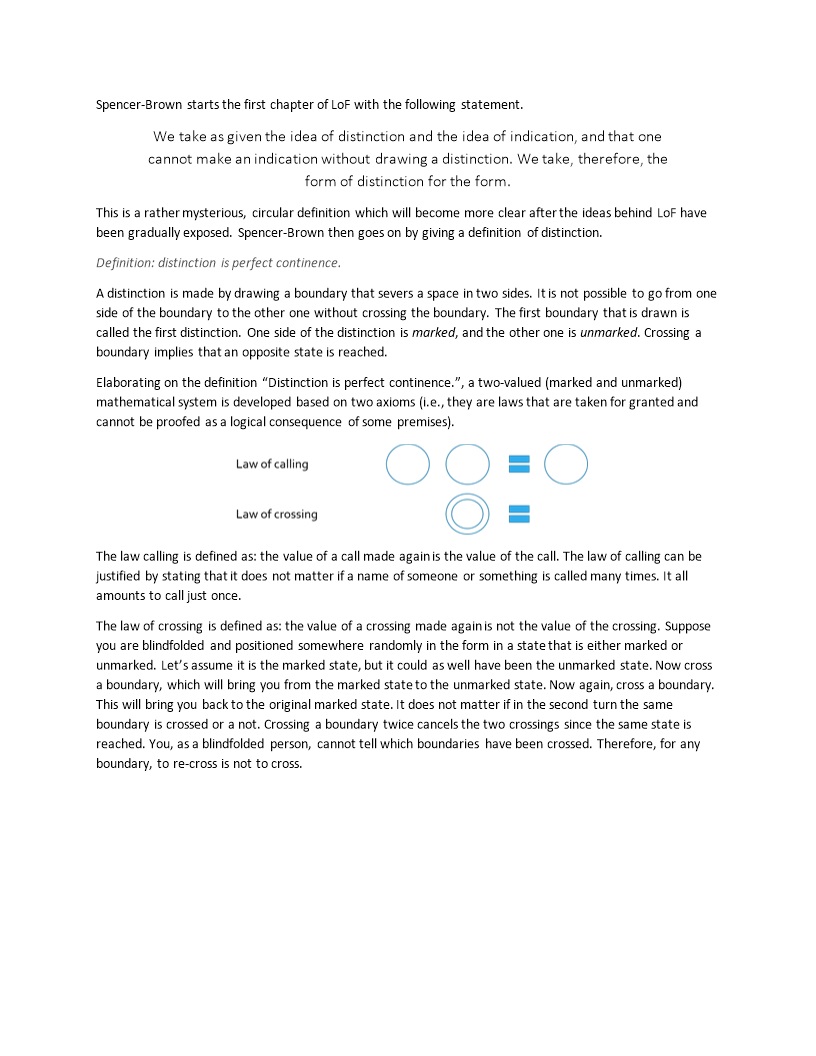 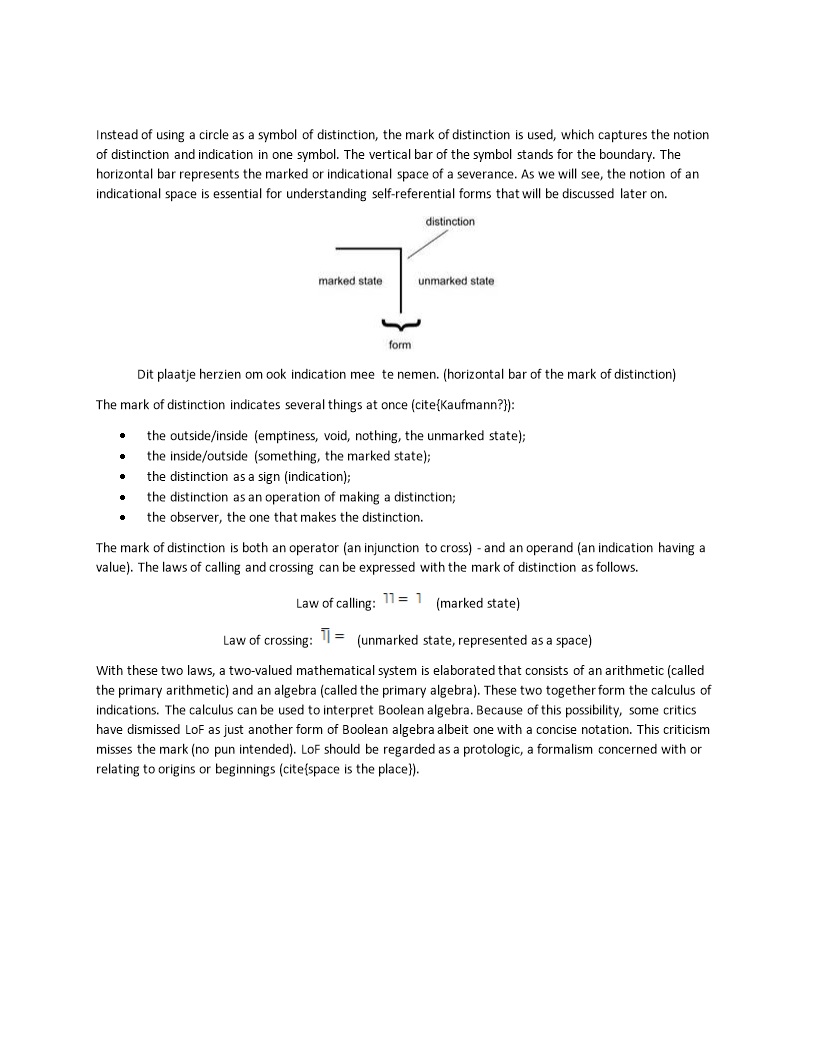 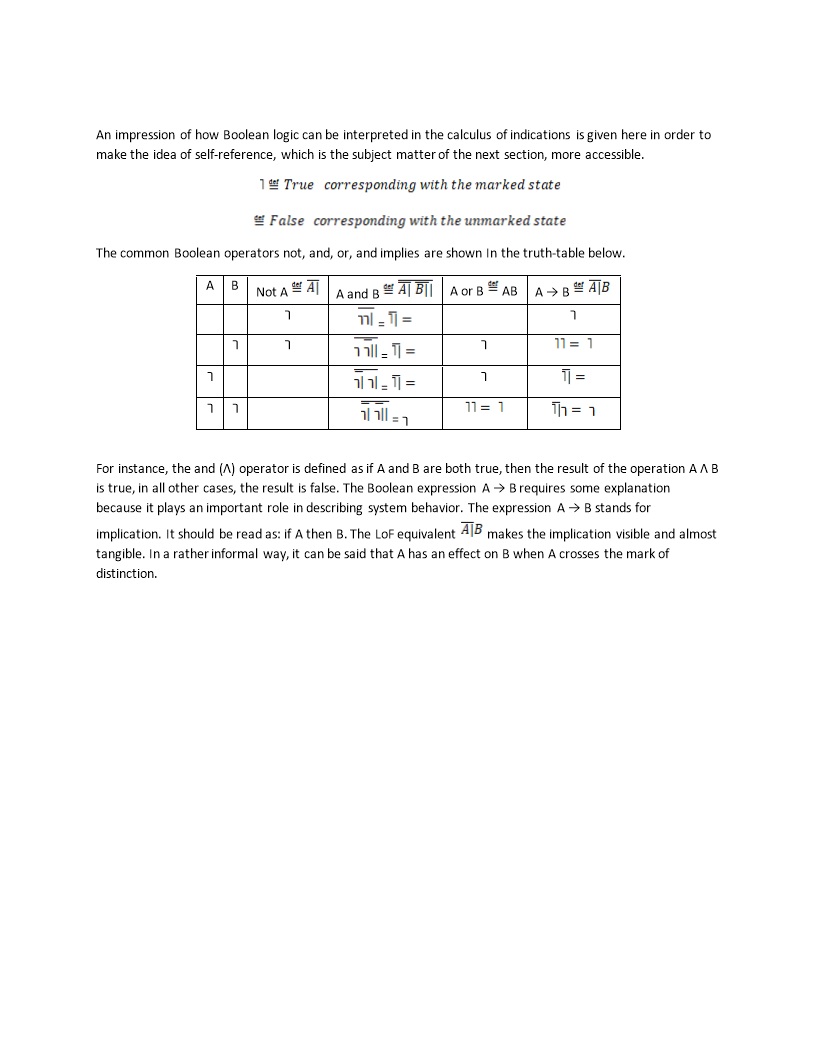 Spencer-Brown starts the first chapter of LoF with the following statement.

This is a rather mysterious, circular definition which will become clearer after the ideas behind LoF have been gradually exposed. Spencer-Brown then goes on by giving a definition of distinction.

Elaborating on the definition “Distinction is perfect continence.”, a two-valued (marked and unmarked) mathematical system is developed based on two axioms (i.e., they are laws that are taken for granted and cannot be proofed as a logical consequence of some premises). 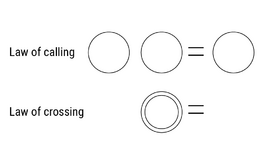 The law calling is defined as: the value of a call made again is the value of the call. The law of calling can be justified by stating that it does not matter if a name of someone or something is called many times. It all amounts to call just once.

The law of crossing is defined as: the value of a crossing made again is not the value of the crossing. Suppose you are blindfolded and positioned somewhere randomly in the form in a state that is either marked or unmarked. Let’s assume it is the marked state, but it could as well have been the unmarked state. Now cross a boundary, which will bring you from the marked state to the unmarked state. Now again, cross a boundary. This will bring you back to the original marked state. It does not matter if in the second turn the same boundary is crossed or a not. Crossing a boundary twice cancels the two crossings since the same state is reached. You, as a blindfolded person, cannot tell which boundaries have been crossed. Therefore, for any boundary, to re-cross is not to cross. 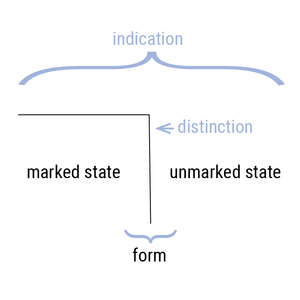 The mark of distinction indicates several things at once: 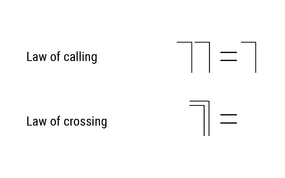 With these two laws, a two-valued mathematical system is elaborated that consists of an arithmetic (called the primary arithmetic) and an algebra (called the primary algebra). These two together form the calculus of indications. The calculus can be used to interpret Boolean algebra. Because of this possibility, some critics have dismissed LoF as just another form of Boolean algebra albeit one with a concise notation. This criticism misses the mark (no pun intended). LoF should be regarded as a protologic, a formalism concerned with or relating to origins or beginnings (see: space is the place (Michael Schultz, 1 januari 2009)).

An impression of how Boolean logic can be interpreted in the calculus of indications is given here in order to make the idea of self-reference, which is the subject matter of the next section, more accessible.

The common Boolean operators not, and, or, and implies are shown in the truth-table below.

For instance, the and (ꓥ) operator is defined as if A and B are both true, then the result of the operation A ꓥ B is true, in all other cases, the result is false. The Boolean expression A → B requires some explanation because it plays an important role in describing system behavior. The expression A → B stands for implication. It should be read as: if A then B. The LoF equivalent A|B makes the implication visible and almost tangible. In a rather informal way, it can be said that A has an effect on B when A crosses the mark of distinction.