The Social Theory of a Sustainable, Collaborative Learning Society (ST) is founded on a strong theoretical basis, which is the subject of this part of the writing. The underlying theories will be unfolded step by step, each step resulting in clarifying aspects of a fundamental principle or a ground rule derived from the principles. These fundamentals taken together underpin the social theory. Some theories are hard to digest. More specifically: George Spencer-Brown’s Laws of Form is discussed, which is a mathematical and philosophical work describing the very principles of mathematics and human cognition. Laws of Form provided the basis for the social theory of Luhmann, which is highly influential but also not easy to comprehend. The theories are explained in such a way that the fundamentals for the Social Theory of a sustainable, collaborative learning society are justified. Some theories like Soft Systems Methodology (SSM) can be applied in practice. The sections on these theories can be seen as an elaboration on the methods and techniques described in the facilitator guide. Nevertheless, the focus here is on the underlying theory and its implications rather than on practical usage, although references to 'how to' material are provided.

Readers with limited or no theoretical inclinations may just assume the validness of the fundamentals put forward by taking the explanations for granted. However, if there is one chance of having a, relatively speaking, easier point of entrance into the more theoretical side of these matters, this might be it. We have worked hard at making the explanation as accessible as possible, so it might be worthwhile to dig deeper and gain profound insights. Again, it is not everyone’s cup of tea, but give it a try.

The two injunctions and the two rules are derived directly from the axiom we got to move. The axiom was justified on the basis of a call for action. We are facing substantial man-made and environmental changes such as climate change that require countermeasures. Doing nothing in such cases is simply not an option. However, the idea here is advanced that living creatures like human beings have no other option but to move. Living creatures sense their surroundings continuously and adapt to changing circumstances in order to keep going.

The concepts put forward in this introduction and the remainder of the foundation are structured according to the concept map shown below (also available in pdf-format). Granted, this is a complex map that is not easily understood at first sight. However, you may want to revisit this map to get a better understanding on how theories and methods discussed in the foundation are related and supplement each other. 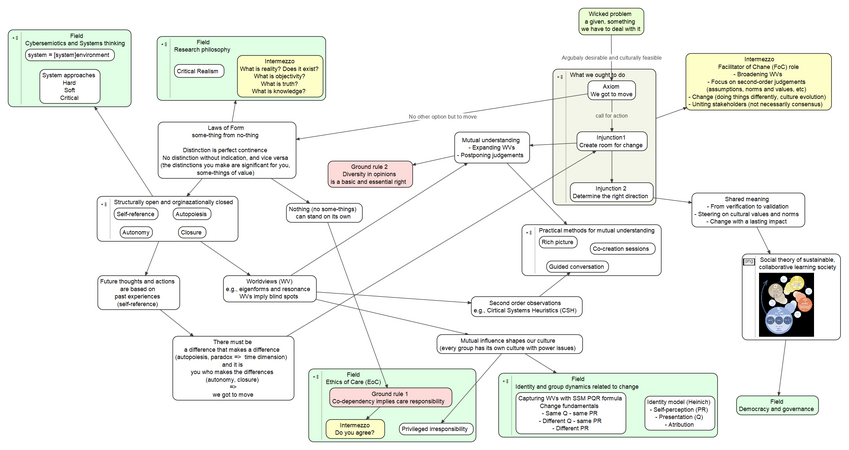 The fundamentals for continuously sensing and adapting our surroundings can be traced back to Laws of Form (LoF). LoF states how some-thing can be created out of no-thing by making distinctions. Imagine a formless void that contains everything there is, but at the same time it is nothing because due to its formlessness, nothing can be discerned. The formless void is nothing and all at the same time. LoF starts with the definition: distinction is perfect continence, meaning that by making a distinction, some-thing is opposed to no-thing. This implies that nothing (i.e., no some-thing) can stand on its own, because without a distinction, something reduces to nothing.

All living creatures make their own distinctions to distinguish all kind of things in our world. The distinctions you make are meaningful to you. They are significant, some-things of value. Therefore, a distinction and an indication (i.e., indicating some-thing of value) arise together. There is no distinction without an indication, and vice versa.

LoF’s concept of living creatures making distinctions has a number of consequences. Firstly, because nothing, including human beings, can stand on its own it follows that we depend on each other. And since we depend on each other, we have the moral obligation to take on care responsibilities, not just physical care but also care in the broadest sense (i.e., I care about you). This moral obligation forms the heart of the Ethics of Care (EoC) philosophy and is reflected in ground rule 1: co-dependency implies care responsibility.

Secondly, because every living creature creates its own distinctions by sensing the world, the whole idea of objectivity becomes less conceivable. For instance, questions can be raised regarding whether an objective reality exists. Or one step further, does reality exist in the first place, or are things constructed in one’s mind only? What is, then, truth and what is knowledge? Clearly, taking a stance in these matters determines the way research to bring about change is conducted. Our stance is that reality exists, that is to say, things in reality are for real. However, these things cannot necessarily be associated with objectively determined truths about these things. Things are the way they are. It is the way how things are perceived, i.e., the distinctions attributed to a thing that determine its qualities. The research philosophy that corresponds with this view is critical realism. This is not to say anything goes. Some theories are substantiated with convincing evidence, such as theories obtained with scientific research. Nevertheless, it is important to realize that even for findings obtained with scientific research it is difficult to claim universal, objective truths.

Thirdly, living creatures such as human beings are autonomous in the sense that everyone makes their decisions on the basis of sensing the world. This is a self-referential notion. Future thoughts and actions are based on experiences which come from your own distinctions which you made in the past. Besides being self-referential, no other thing, e.g., another human being, can directly control your behavior. This does not mean that you cannot be influenced by the outside world, clearly you are and sometimes very strongly, but in the end, you make the decisions although your options may be limited. In short, a human being is a self-organizing creature: organizationally closed – a closure in which human beings make their own decisions and guide their actions – and structurally open – influenced by the environment that includes other human beings.

To elaborate on the phrase ‘structurally open’, human beings mutually influence each other by means of interaction. This can, for instance, be in a direct way by being engaged in a dialog, but also indirectly by reading a book. In order to keep going, there must be a difference in what is being said and what has been said before. Otherwise, in the end, nothing substantial is said anymore, which amounts to a standstill. However, a human being only accepts a new idea or insight if it resonates with previously established concepts in the form of distinctions that have been formed. Only then, will human beings react and keep themselves and therefore a group alive: there must be a difference that makes a difference. Human beings renew themselves in a psychic sense by autonomously referring to past experiences. This process is called autopoiesis, which means self-producing by using their own means. Luhmann has extended the autopoiesis concept outside the realm of human beings to social systems.

The four concepts: self-reference, autopoiesis, autonomy and closure, are distinct concepts but clearly, strongly related. Living can be equated with cognizing (sensing) the world. This leads to adaptations regardless if these adaptations are made to adjust to small, mundane disturbances or to large disruptions. In order to keep going as a human being or a group, there must continuously be differences that make a difference. A standstill is not an option. Therefor the conclusion is inevitable: we got to move, by all accounts.

Recognizing that we must move is one thing, but this statement does not tell us how to do so. Today’s societies are complex and the challenges we are facing have a wicked nature. Appropriate methodologies, methods and techniques are needed to tame the complexity and to really understand the underlying mechanisms so that we can intervene effectively where deemed necessary. Systems thinking and cybernetics provide the foundation to reason about wicked problems systematically. Together they form an interdisciplinary field, incorporating ideas from philosophy, mathematics, physics, sociology, biology, and many more, to develop an overarching theory to understand complex phenomena from different perspectives. The connection to other fields, such as ethics of care, identity and group dynamics, and democracy and governance, are discussed in sections on the Social Theory and social innovation applications.

The foundation for the social theory is organized according to the scheme shown below. 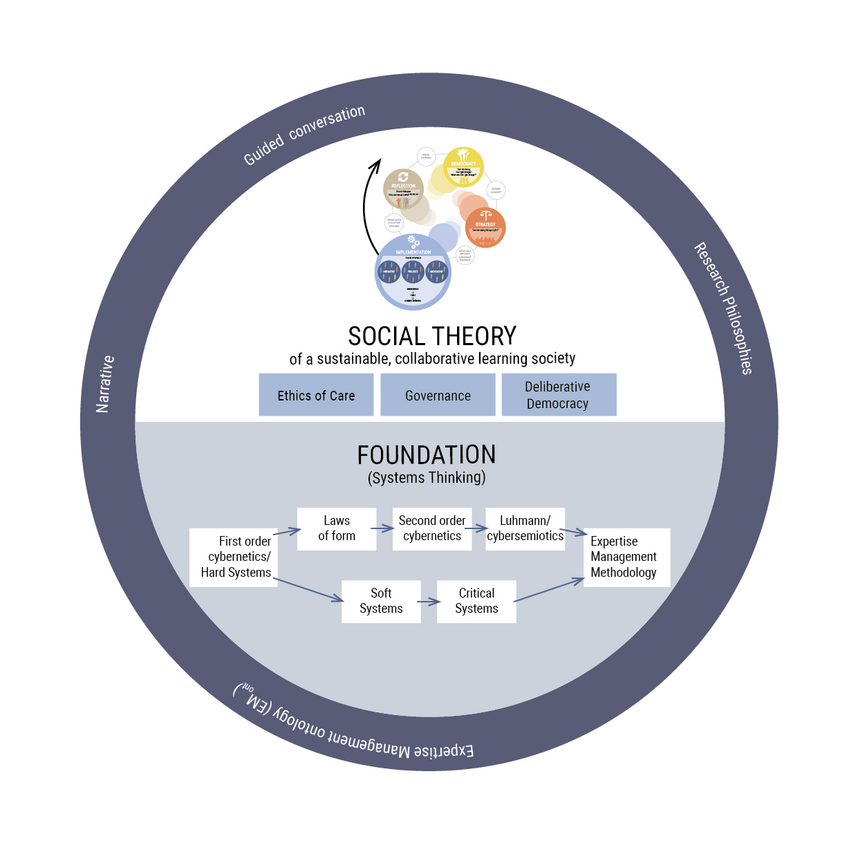 Systems thinking is about understanding the whole through its parts. However, the parts cannot be understood without the context of the whole. Especially the relationships between the parts are important because they give rise to often surprising interactions between parts, and hence complex behavior of the whole system. Cybernetics is the art of steering, navigating or governing a system. First-order cybernetics, also known as hard systems thinking, introduced the concepts of feedback to tame complex behavior, in particular negative feedback for reaching and maintaining a desired outcome.

Remarkably, there is hardly any cross-fertilization between these two branches, which is regrettable because both strands of systems thinking have developed valuable ideas and methods. In particular, the hard systems approach evolved into soft and critical system approaches in which worldviews and boundary questions play a pivotal role. The soft and critical systems approaches provide practical methods to investigate stakeholder’s worldviews on societal challenges and to accommodate them in order to make progress together. Investigating and accommodating worldviews is key to change, which is reflected in ground rule 2: diversity in opinions is a basic and essential right. The concepts of worldviews and boundary questions are also present in second-order cybernetics albeit in a more theoretical sense. In essence, they are very similar to the second-order cybernetic concepts like distinction and a difference that makes a difference.

With the Expertise Management Methodology (EMM), which has the Expertise Management Ontology (EMont) as its core, the two strands are brought together. This results in a rich and open methodological framework in which theories and concepts can be embedded, like the aforementioned systems approaches and cybernetics. A number of social innovation applications (such as human behavior models and identity theory) are grounded on the concepts provided by EMM. These applications are all fundamental to the Social Theory of a Sustainable, Collaborative Learning Society.