Posing the 12/24 (as-is & as-it-should-be) questions is not an exercise in which each box in the table is ticked automatically. It is a process of critical reflection in which one stakeholder’s insights influence the insights of the others, because things can be regarded from a different point of view or other value system. This makes critical reflection an instrument for a dialogue between stakeholders. The process of (once again) taking boundary judgements into account is visualised in CSH with the eternal triangle (see Figure 1). 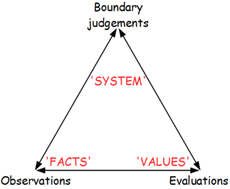 An easily recognizable example is not taking into account a group of stakeholders. In educational environments, teachers’ and students’ insights are not always considered, for example. People speak about others, instead of with others. If these groups are included, points of view can start shifting. A random example from practice, is that educationalists can be convinced that the students’ educational process must be tracked at every single stage, while teachers know from experience that more testing does not necessarily lead to better education.

In short, involving different stakeholders can lead to different boundary judgements. As a result, different facts and value judgements will have to be included in the dialogue between stakeholders.

In the case of student monitoring, teacher’s findings can be seen as factual material, just like hard numbers from written tests. The value system will then no longer just be based on objectively determined facts (the numbers tell the tale), but will be expanded with different value judgements that offer a more complete picture (for example: a student’s home situation and its effect on performance).