The hard system approach, in particular System Dynamics (SD), was, and still is today, very successful in understanding complex problems involving interacting feedback loops. But hard systems thinking, or first-order cybernetics for that matter, is also criticized. Hard systems thinking is about prediction and control. One or more common, shared goals are assumed and by intervening in processes, these goals are achieved as good as possible although trade-offs have to be made in case of conflicting goals. The goals are typically set by those in power. This way of thinking is less suitable for systems in which human’s ideas and feelings matter. Humans differ in ideas about purpose and hold different norms, values and beliefs. Also, the way how to achieve a goal, even if shared, may differ. In short, worldviews may discord or even stronger may be in conflict. SD, or hard systems thinking in general, provide no ways to deal with these issues.

Statement: People differ in worldviews, but nevertheless they typically adhere to aspects of multiple worldviews, which provides room for accommodation.

Peter Checkland recognized the problems with hard systems thinking and established a radical shift to soft systems thinking. The result of his shift is Soft Systems Methodology (SSM) (Peter Checkland and John Poulter, 1 januari 2006), which is one of the most practiced systems approaches today. It marked a shift from modeling a real world situation to how people think about the situation. The real world is messy. By assuming that (most) people act purposefully, thinking about the world entails capturing people ideas about purpose and ways to act accordingly. (Note: a large part of the aforementioned book on SSM is included in Systems Approaches to Managing Change). 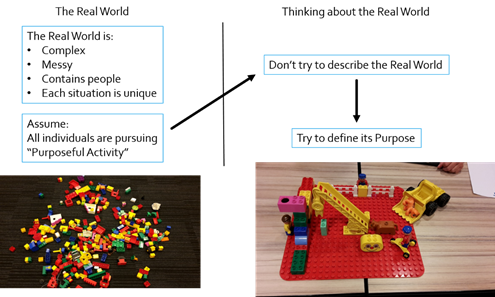 Figure: real world versus how people think about the world.

SSM turns thinking into a group learning process. The starting point of a SSM investigation is a so-called problematic situation in which everyone involved feels that there is room for improvement, but they are not quite sure what kind of measures should be taken in order to improve the situation. By explicating worldviews of a situation in the form of human activity systems, a detailed insight is established about how people involved in the situation ought to act and for what purpose. The worldviews can then be discussed systematically to find an accommodation for change that is arguably desirable and culturally feasible.

A human activity system is a notional system that is constructed in the head of a person. The envisioned  activities do not necessarily occur in reality. Thus the shift form hard systems thinking to soft systems thinking can also be seen as a shift from an ontological stance (e.g., realism) to an epistemological point of view (e.g., interpretivism and constructivism).

The research philosophy that corresponds with SSM is interpretivism, see also Gadamer's work on Hermeneutics (Hans-Georg Gadamer, 1 januari 1960) (the theory and methodology of interpretation).

SSM is a methodology, not a method. Methodology in this context should be understood as a framework for investigating problematic situations with clear philosophical and theoretical underpinnings, such as adhering to the philosophy of interpretivism and constructivism. In the course of developing SSM, many novel methods, tools and techniques have been developed, including rich pictures, the PQR formula, CATWOE, and purposeful activity model. These form a coherent set with which possibilities for change can be investigated systematically. However, SSM is an open framework that allows to incorporate elements from, for instance, hard and critical systems thinking.