The distinction  is re-entered in its own identical space. But the re-entered mark of distinction has become a mark that cannot be crossed anymore. The past is the past, and there is nothing you can do about it. The distinction is taken as an indivisible whole indicating your actions and the resulting reactions of the world in the past.

Statement: Concentrate on how to look, instead of what to see. 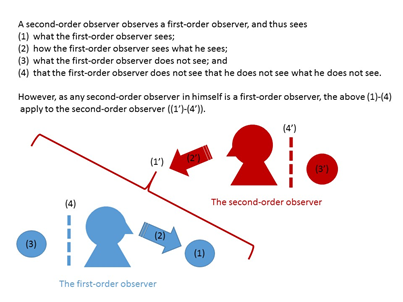 Incidentally, by conceptualizing self-reflection as a second-order observation observing yourself, it becomes clear that history does matter. Things done in the past shape present and future actions. As Gadamer argues, we cannot escape tradition (cite{Truth and Methods}). Tradition is overarching, which also holds for applying the scientific method in human sciences. To put it bluntly, the scientific method objectifies the present but without taking into consideration what we used to do and why, that is, our tradition. But tradition cannot be brushed away from human life, and that, ironically, applies for the way we conduct scientific research as well because the scientific method itself evolves in time due to new insights. Thus tradition is overarching, but it also evolves.