Knowing-how knowledge (expertise, behavior and (non-)human activities) and worldviews of people acting in particular situations can be described and assessed with EMont. EMont consists of modeling elements, i.e., concepts and relations, which will be introduced shortly with the help of the fictitious and simplified situation of people counteracting a flooding disaster. In the section on applications, advanced modeling concepts are presented in the form of reusable patterns that can be adapted for modeling realistic situations.

The ontology is presented with the help of concept maps, a visual notation for relating concepts. As such, a concept map can be regarded as the visual counterpart of the fundamental semantic web proposition: subject → predicate → object (see as an example the Saint Nicolas and Black Peter concept map).

Capturing Activities with the PQR Formula

Human activity systems, as well as activities of other kinds of actors like machinery, can be modeled with help of the PQR formula. It concisely captures (human) activities executed to deal with particular circumstances which are motivated by the actors’ worldview. The formula is pivotal to EMont and originates from the Soft Systems Methodology. Applying the PQR formula touches upon the expertise or knowing-how knowledge of an expert. It shapes a root definition: a statement written in a few sentences capturing the essence of someone’s worldview. The PQR formula reads like a sentence: “Do P by a Q in order to achieve R”. The letters P, Q and R do not resemble anything, except for being subsequent letters in the alphabet. A specific meaning, however, is attached to these letters (see Table 1).

The PQR formula applied to the case of counteracting a disaster (see Figure below) looks like: “You can counteract the disaster (P—What) by, depending on the circumstances, fighting it (Q1—How) or evacuating (Q2—How) in order to save you and your relatives’ lives (R—Why)”.

Table 1. The meaning of P, Q and R of the PQR formula.

The PQR formula is in EMont applied recursively in line with the recursive nature of patterns in the MPF. A How (Q) can be decomposed in more specific or diverse How’s (Q’s). To continue from the example in the figure below, the evacuation activity can be subdivided into evacuation by car (Q2,1) or by public transport (Q2,2). Hence, the evacuation activity (Q2) gets the status of a What activity (P2) for its constituents. The link between a How (Q) and a What (P) is established with the “part of” relation. Just like activities, goals can be decomposed into sub-goals as well. 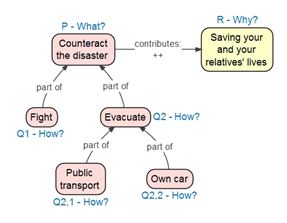 Figure 1: Example of applying the PQR-formula.

Generalizing from the example in this figure: by applying the PQR formula recursively, we can model an experts’ knowledge, that is, his behavioral patterns, at any desired level of detail. It should be noted that experts’ knowing-how knowledge is to a certain extent tacit knowledge, which is internalized and cannot be described in every detail. Nevertheless, experts can convey part of their expertise by pinpointing good practices and pitfalls. By making this explicit, we can assess whether the know-how of experts, i.e. , the way they achieve goals, cohere in order to make progress together in a problematic situation.

A situation is comprised of several actors brought together to achieve goals. Rather than talking about actors, we prefer to model human behavior as roles. An actor is regarded as someone or something in the real world that can play one or more roles. It is also conceivable that a role is realized by more than one actor. With the concept of role we can abstract away from real world entities and make a situation more generally applicable.

Technically speaking, a situation and roles in a situation are both modeled with the unifying concept of context. The reason to unify these two concepts is that they are strongly related, or even stronger, they are actually the same when viewed from different perspectives. Take, for example, an organization, which can be seen as a role in particular situation together with other roles. But at the organization-level, the organization can be regarded as a situation that can be decomposed on its turn into roles such as departments and individual employees acting their parts.

The finer points of situations and roles are discussed with the help of the “Community resilience” example (see Figure below). A community tries to cope with disturbances (main activity—What) by minimizing the effect of disturbances (main goal—Why), including the more specific situation “Flooding” and two roles namely “Rescue worker” and “Civilian”. 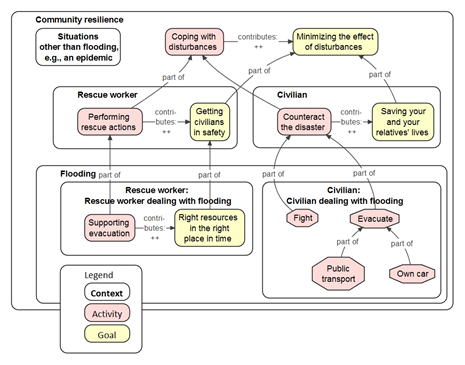 Figure 2: example of a visualization of contexts: Community resilience.

Regarding roles, we have up to now focused only on one single way to carry out activities related to that role. However, people can carry out an activity in various ways. These different approaches originate from differences in people worldviews. And vice-versa, someone’s worldview can vary depending on the situation he is engaged in. Therefore, different worldviews will have to be considered in modeling activities. A worldview is regarded in EMont as a particular way of role behavior in a given situation.

Worldviews can be included in the model similarly to the way contexts were used to model roles in specific situations. The Figure below illustrates a situation with different worldviews: a Civilian can deal with flooding by leading the neighborhood and helping his neighbors or by dealing with flooding on its own. The sub-situation “Civilian dealing with flooding on its own” includes the belief “I do not trust the government”, which means that this particular civilian does not trust the government to organize public transport as evacuation means and will evacuate only with his own car. 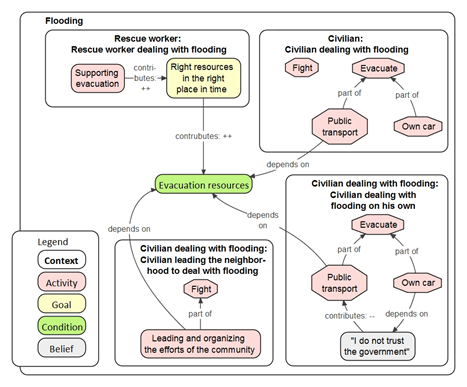 Figure 3: example of how worldviews are included in a concept map.

Interdependencies and Relations between Elements

Roles played by actors in a situation are typically not island, they interact. The concept condition is used to characterize the quality of interactions between roles. They determine how and how well the actors in a situation interact and execute activities. Conditions can be influenced by the behavior of actors. They are often defined in a qualified way, e.g. “the availability of rescue workers”, or “sufficient supply of evacuation resources”. As such, a condition can be regarded as a system indicator indicating a system’s state.

Typically, a goal and condition are related, expressed by the relation “contributes”: a goal contributes to a condition. In the Figure below, the goal “Right resources in the right place in time” contributes positively to the condition “Evacuation resources”. In other words, the condition is an indication of the extent to which the goal has been achieved. Note, a goal and a condition are deliberately modeled as different elements, because in real situations it frequently occurs that achieving one goal (contributing to a condition) can be undermined by achieving another goal (contributing to the same condition). Take for instance (not shown in the examples), a government formally informing civilians during a disturbance. The activities performed by civilians are likely to depend on the quality of information given by the government. This condition might be undermined though by civilians who spread rumors, whether deliberately or true or not, resulting in a lower information quality level. This might confuse civilians who have to decide who to trust, the government or the rumors.

The examples in the two Figures below show the type and quality of relations between activities, goals and conditions: 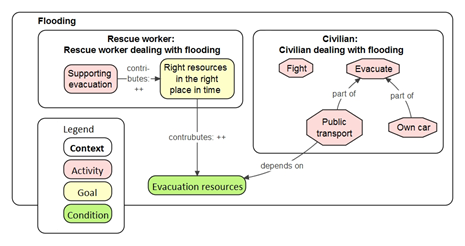 Figure 4: example of relations (dependencies and contributions) between elements.

The semantics of the “depends on” and the “contributes” relations have been deliberately not defined strictly. First, in our experience, these two relations are sufficient defined to get the finer points of interacting roles in a situation across. Second, precise definitions may actually restrict the applicability of the relations. As is the nature of the semantic web, ontologies may be refined to fit the application domain at hand. 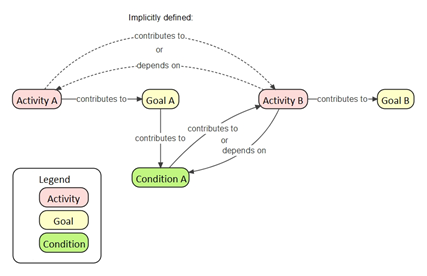 The Main Scheme of Community Resilience

Concept maps show the relations between concepts as propositions visually. This is especially useful for conveying ideas between stakeholders. However, concept maps of complex situations tend to grow large. Creating clarity in a complex model, such as the one about community resilience (see Figure below, composed from Figure 2 and Figure 3), can be done firstly by developing a main scheme presenting the big, more generic picture including only the most important situations (sub-contexts, or so-called “hooks”). Details of the different sub-contexts can be provided only when “zooming in”, thus by developing separate schemes that describe the sub-context selected from the main scheme in more detail. 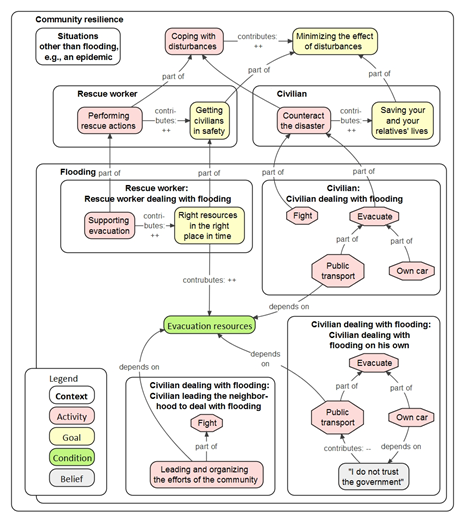 Figure 6: example of a main scheme presenting the big, more generic picture including only the most important situations.

The strength of modeling complex situations with EMont lies in putting patterns of (non-) human behavior, modeled with the PQR formula, in a context and applying these recursively. A context is key to modeling situations or roles, related activities and interactions of actors with different worldviews. The example of a flooding disaster is used as a simplified and incomplete illustration of a real situation. Real situations can be modeled in a comprehensive manner, but the models can also become very complex and big. Detailed descriptions of the sub-situations can be made by dividing a situation into sub-contexts and describing them in separate concept maps.

Subjects not discussed in this introduction to modeling with EMont include documenting good and bad practices, temporal orderings of (compound) activities and modeling conceptual knowledge and its connection to PQR’s in a context. These subjects make modeling with EMont more comprehensive, yet does not imply introducing significant different elements to EMont. They are discussed in a more formal section on the Expertise Management ontology.